(New York, NY, March 23) Nearly three in ten New York City residents (28%) report that either they or someone in their household has lost their job as a result of coronavirus over the last two weeks. In addition, 80% of NYC residents said they experienced reduced ability to get the food they need, and two-thirds (65%) reported a loss of social connection in the past week, suggesting that compelled isolation is taking a toll on residents. The findings are part of the second week of data from a city and statewide CUNY Graduate School of Public Health & Health Policy (CUNY SPH) tracking survey conducted March 20-22. 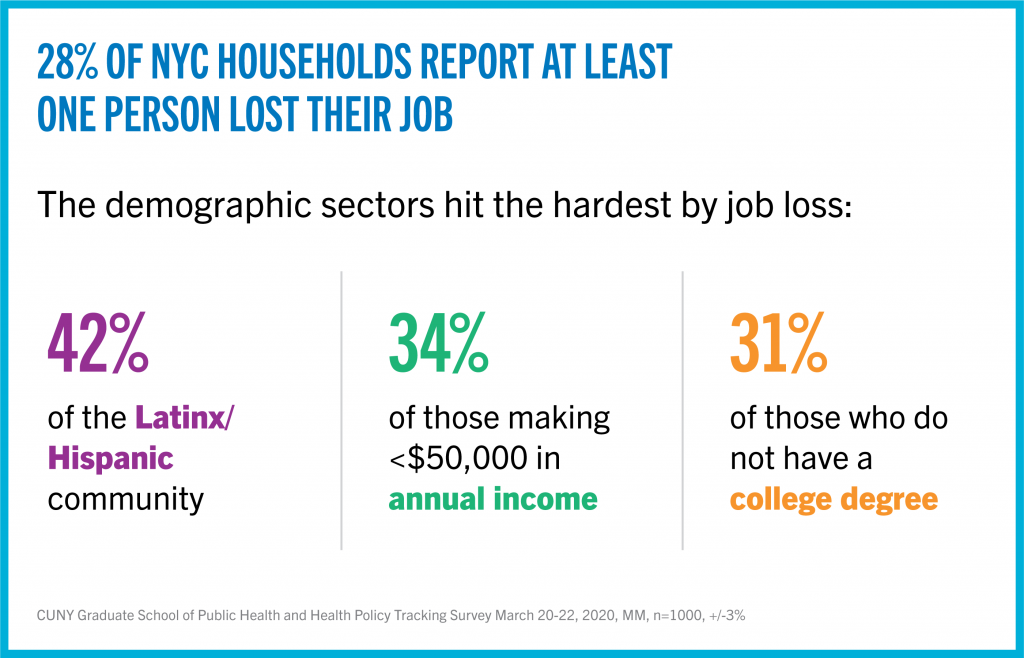 The city’s Latinx/Hispanic community appeared to be hit hardest, with two in five respondents (42%) saying either they or a household member lost their job in the last two weeks. In comparison, about a quarter (24%) of Caucasian and Asian (25%) respondents, and 17% of African American respondents reported household job loss.

42% of people with families of two or more children reported household job losses compared to 27% of those with one child or less.

It appears that most New Yorkers are doing their part to cut down on sharing inaccurate information about coronavirus on social media. In our earlier survey (March 13-15) 27% of all respondents reported sharing information on social media without knowing if it was accurate. This week (March 20-22) that number was reduced by half to 14%. The sharpest improvement was among those over 60 (only 6% of whom reported posting unreliable information compared to 16% the previous week). Among respondents age 30-59 the numbers dropped from 24% to 12% between weeks one and two. Among 18-29 year-old respondents the trend was much less pronounced compared to other age groups, with a drop from 38% to 24%.

80% of NYC residents reported diminished ability to obtain the food they need, and almost a quarter (20%) say the impact has been “a lot.” 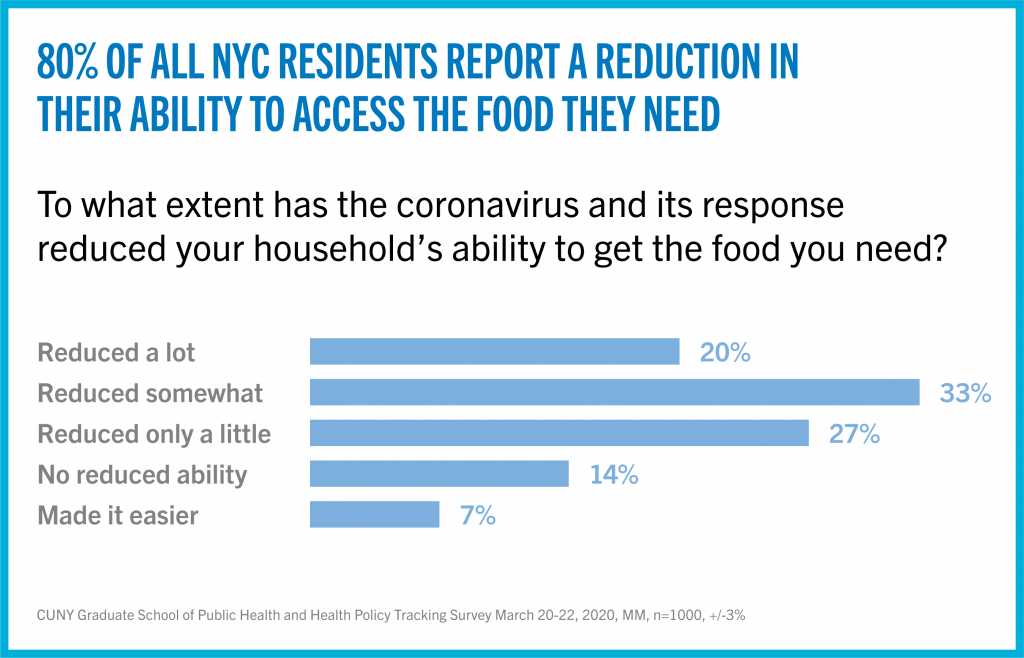 Respondents over age 60 have largely adopted preventive measures, even though two-thirds (64%) of them perceive their risk of illness from coronavirus as low or very low. This is significantly different from the rest of the population where 55% think their risk is low or very low.

Two-thirds of New York City residents over the age of 60 (64%) said they stayed home instead of going to work in the last week, while four in five (80%) avoided interacting with people outside of their households, and more than half (56%) avoided hugging or shaking hands. However, younger respondents adopted preventive behaviors to an even greater degree, especially with regard to staying home from work and avoiding physical contact. These findings suggest that increased risk communication about physical contact should be targeted at older New Yorkers, while younger residents should be more widely informed about the risks of interacting with people outside their homes.

When asked where they get their information on coronavirus, over half (56%) of respondents over age 60 cited television news, and half of them (52%) cited traditional broadcast television news (ABC, NBC, CBS) as their preferred source, suggesting that news messages and public service advertising about coronavirus prevention should use these traditional channels to reach older citizens. Younger residents say they go directly to CDC (30%), and WHO (24%) sites, but also rely on television news (18%) more than social media (10%) as their most trusted sources of coronavirus information.

The CUNY Graduate School of Public Health and Health Policy (CUNY SPH) survey was conducted by Emerson College Polling from March 20-22, 2020. The sample for the NY Statewide results, n=1,000, with a Credibility Interval (CI) similar to a poll’s margin of error (MOE) of +/- 3 percentage points. The data sets were weighted by gender, age, ethnicity, education and region based on the 2018 1-year American Community Survey model. It is important to remember that subsets based on gender, age, ethnicity and region carry with them higher margins of error, as the sample size is reduced. Data was collected using an Interactive Voice Response (IVR) system of landlines (n=527), SMS-to-online (n=) an294d an online panel provided by MTurk and Survey Monkey (n=179).

The state was broken out into the following regions: