New Yorkers and Coronavirus – Support for school closures, while most feel not at risk for contracting the illness

Most people changing their behavior because of Coronavirus

(New York, March 16) A new CUNY Graduate School of Public Health and Health Policy (CUNY SPH) survey released today found that 60% of New York State residents believe their chances of contracting the novel Coronavirus are low or very low. The survey of 1000 New York City households conducted between March 13-15, 2020 and considered accurate within a range of 3%, also found that almost half (47%) of all respondents live in households with one or more members over age 60, the highest risk age group for Coronavirus infection. However, just under one-fourth (24%) of them believed that they were living with someone who has a high chance of becoming sick. In general, a bare majority of New Yorkers (54%) said they have some knowledge of Coronavirus, while 31% believed they know a lot about it.

A substantial majority of New York residents believe that current policies help in containing the virus, including closing schools and universities (73%), limiting travel to and from certain countries (71%), and two weeks of quarantine for people exposed to the virus (72%).

Messages about ways to prevent the spread of the virus have led many residents to change their plans and routines in the past week. More than one-fourth (27%) of respondents reported they did not attend an event they had paid for due to concerns about the virus, and nearly half of respondents (47%) decided to stay home instead of going to work or changed existing travel plans (45%). Well over half (59%) said they had stayed at home instead of going to a restaurant or movie, and almost two-thirds (64%) say they have avoided shaking hands or hugging. The single recommendation that most respondents reported following regarded handwashing. Nine out of ten (93%) of New Yorkers reporting they increased the frequency of which they wash their hands or used hand sanitizer. 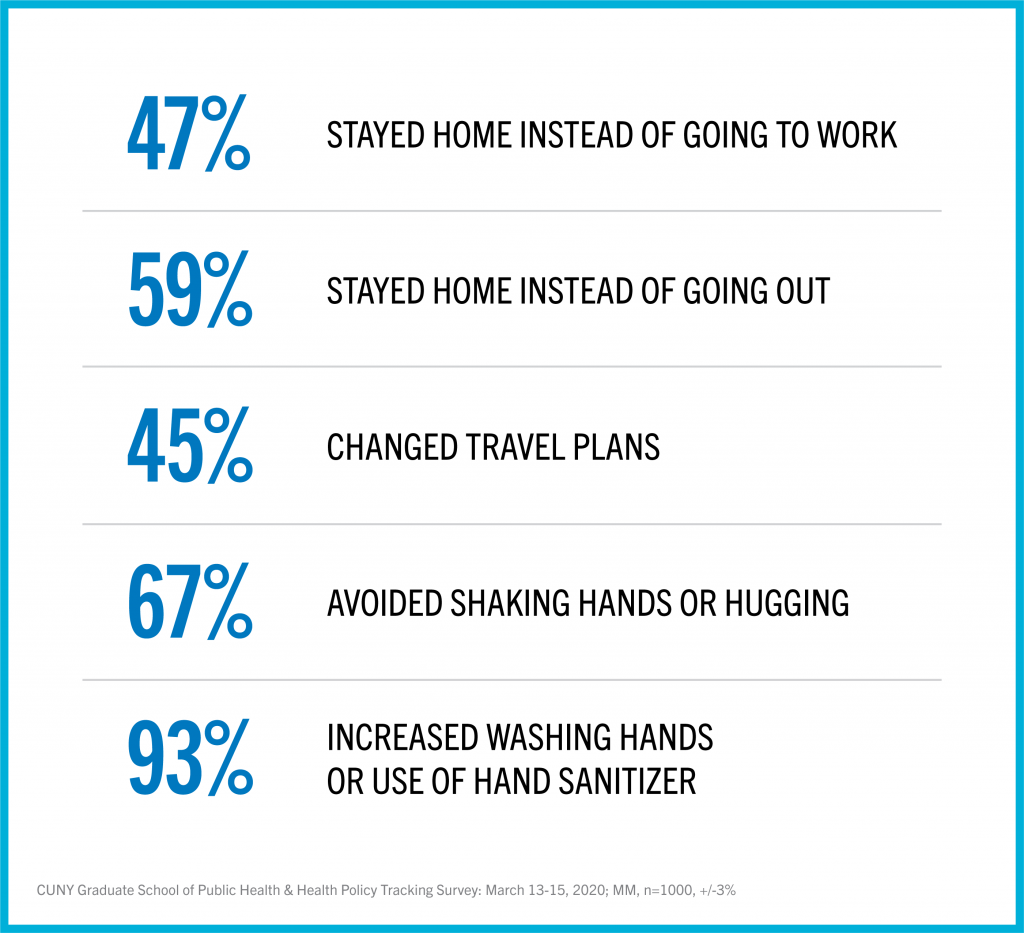 While an equally low percentage (9%) of respondents said social media were their most trusted information source, most people (56%) reported that they do share information on Coronavirus on these platforms at least once a day. Three in ten (30%) said they have passed along information on social media about Coronavirus without knowing if it was accurate. The most frequently used online media sources respondents reported using were news media posts (39%), followed by friends (28%) and the government (18%). 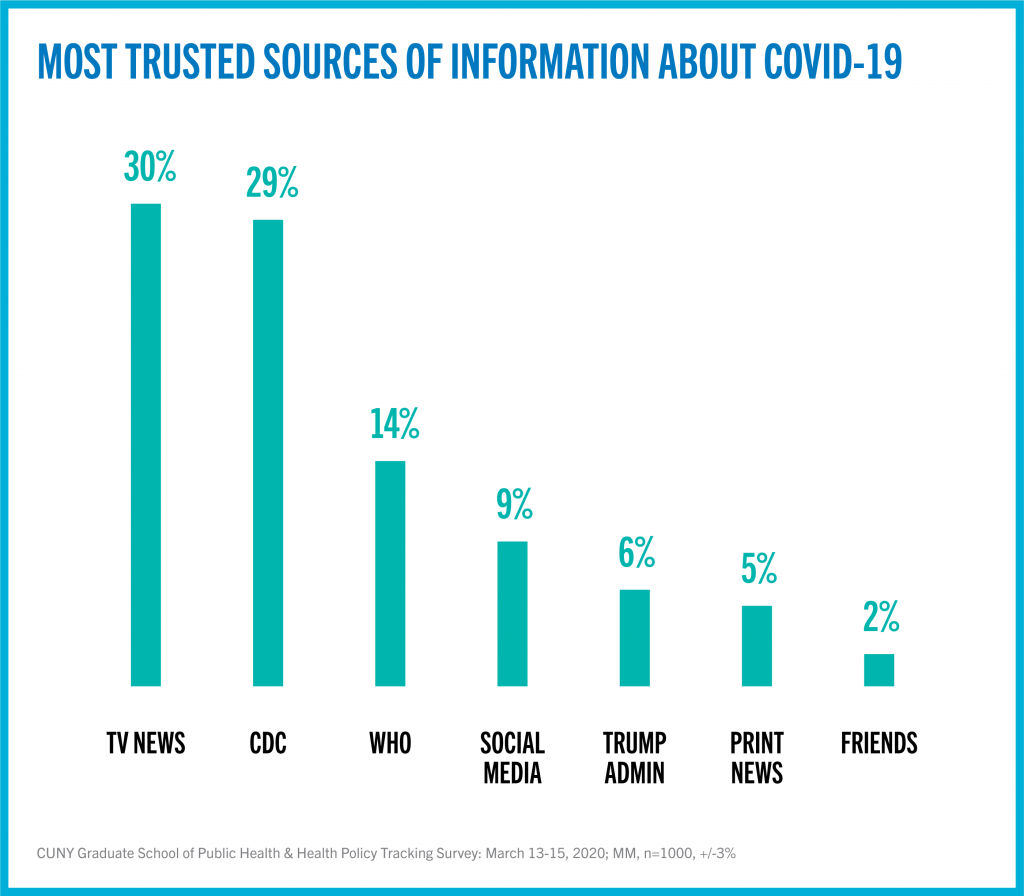 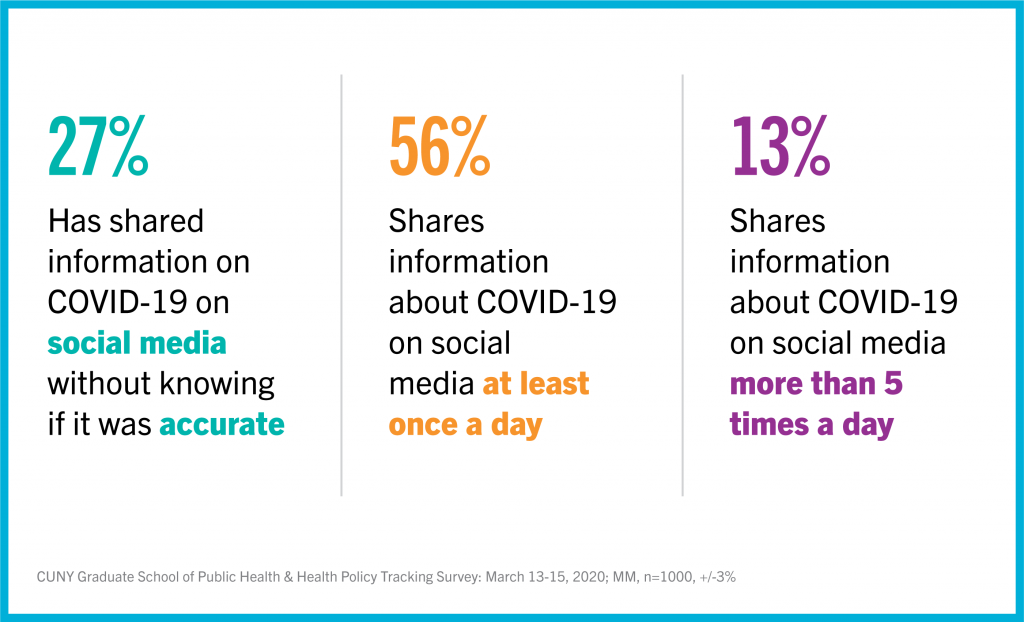 “We conducted this survey, and will update it regularly over the course of this public health crisis, as a part of our unique mission within the City’s largest public university,” said CUNY SPH Dean Ayman El Mohandes. “By working together to promote evidence-based communication and innovateive approaches for individual and community action, we can and will help address the threat of COVID-19.”

The CUNY SPH survey was conducted by Emerson College Polling from March 13-15, 2020. The sample for the NY Statewide results, n=1,000, with a Credibility Interval (CI) similar to a poll’s margin of error (MOE) of +/- 3 percentage points. The data sets were weighted by gender, age, ethnicity, education and region based on the 2018 1-year American Community Survey model. It is important to remember that subsets based on gender, age, ethnicity and region carry with them higher margins of error, as the sample size is reduced. Data was collected using an Interactive Voice Response (IVR) system of landlines (n=477), SMS-to-online (n=360) and an online panel provided by MTurk and Survey Monkey (n=166). 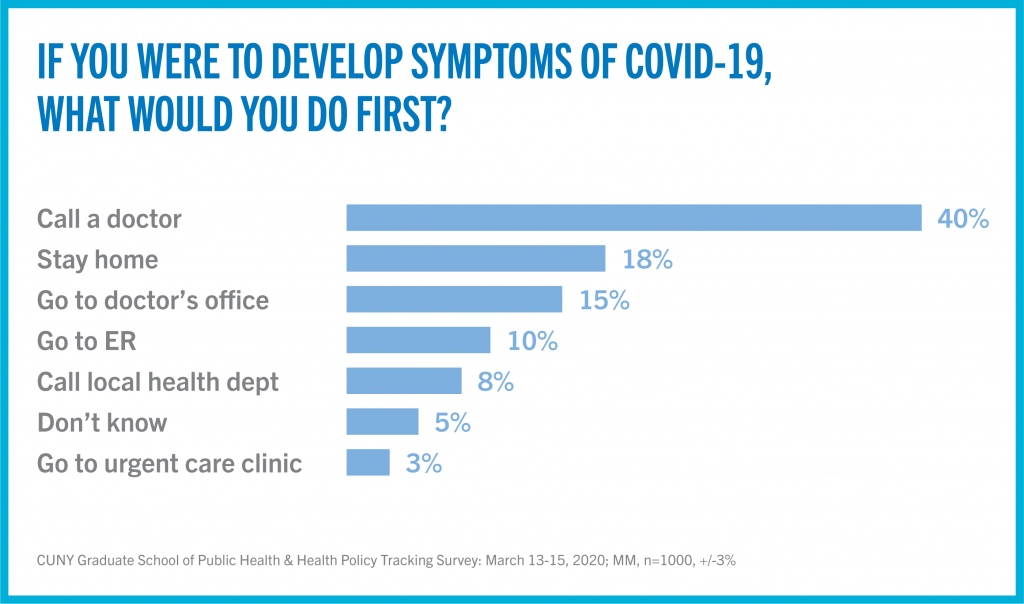 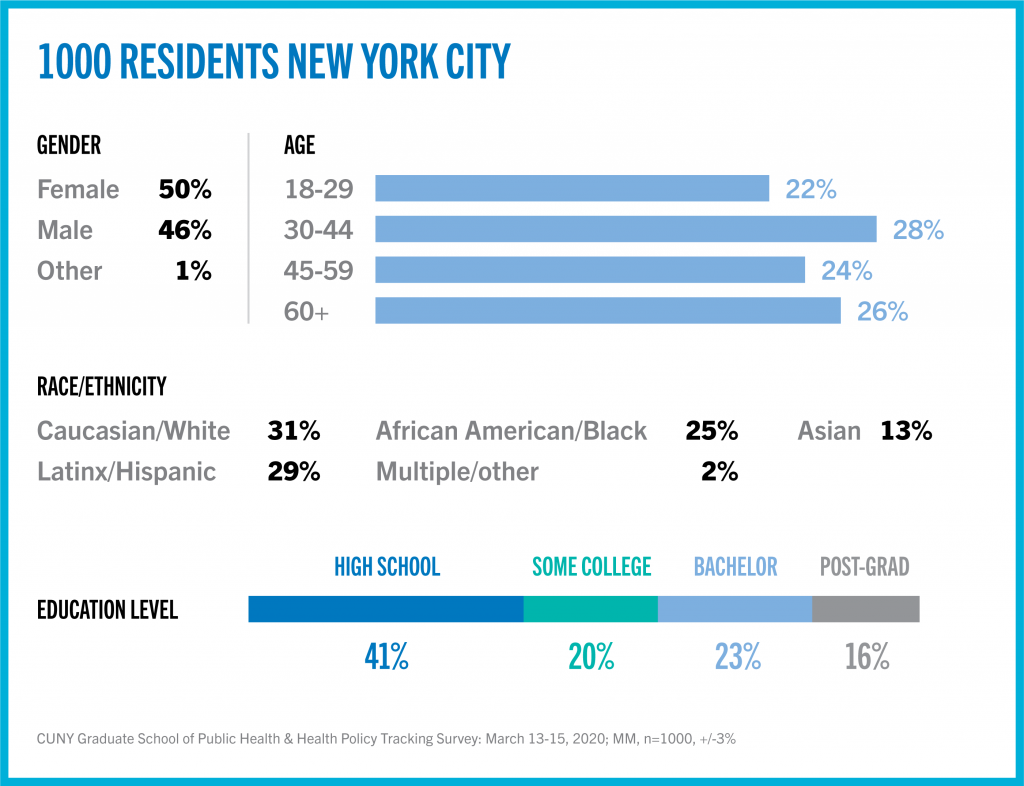