Nearly three quarters (72%) of New York City residents believe that it is likely or very likely that there will be another surge of COVID-19 cases similar to the height of the pandemic last April. Despite this somber expectation, most remain hopeful for the city’s recovery and are committed to remaining here. These are key findings from a survey of public perceptions and experiences during the city’s recovery from the effects of the COVID-19 pandemic conducted by the CUNY Graduate School of Public Health & Health Policy (CUNY SPH). One thousand New York City residents were polled from September 25-27, 2020. The same panel of respondents will be surveyed following the November General Election and again in January 2021.

When asked if they are hopeful about a full recovery for the NYC economy, 63% were either hopeful or very hopeful, though there was less consensus on the timetable. 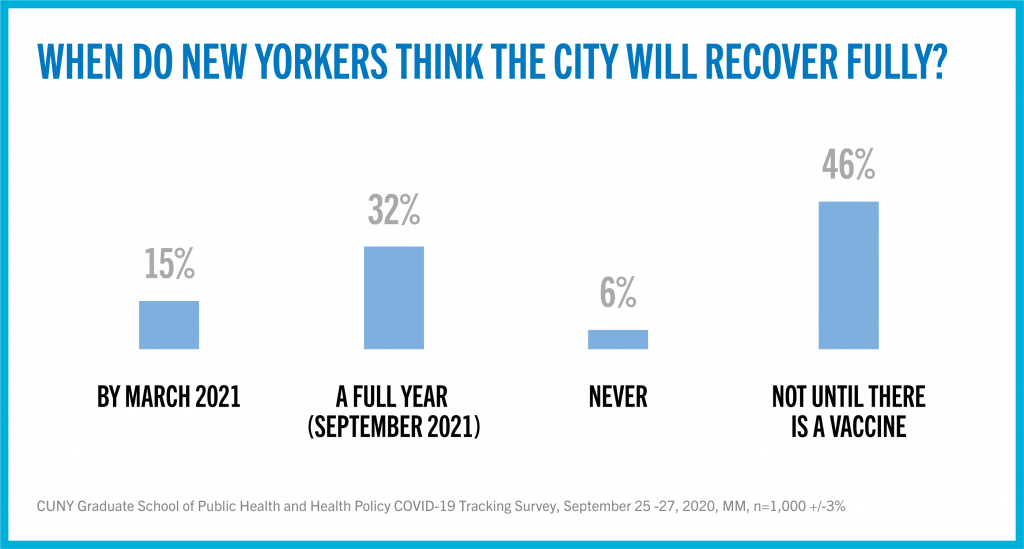 More than one New Yorker in seven (15%) believes the economy will recover fully by next March, while about a third (32%) say that recovery will take a year, and some (6%) believe the economy will never fully recover. Nearly half of respondents (46%) believe that New York City’s economic recovery is tied to the development of a vaccine. Notably, almost two-thirds (65%) of those respondents agree or strongly agree that they will personally get a vaccine when it becomes available. 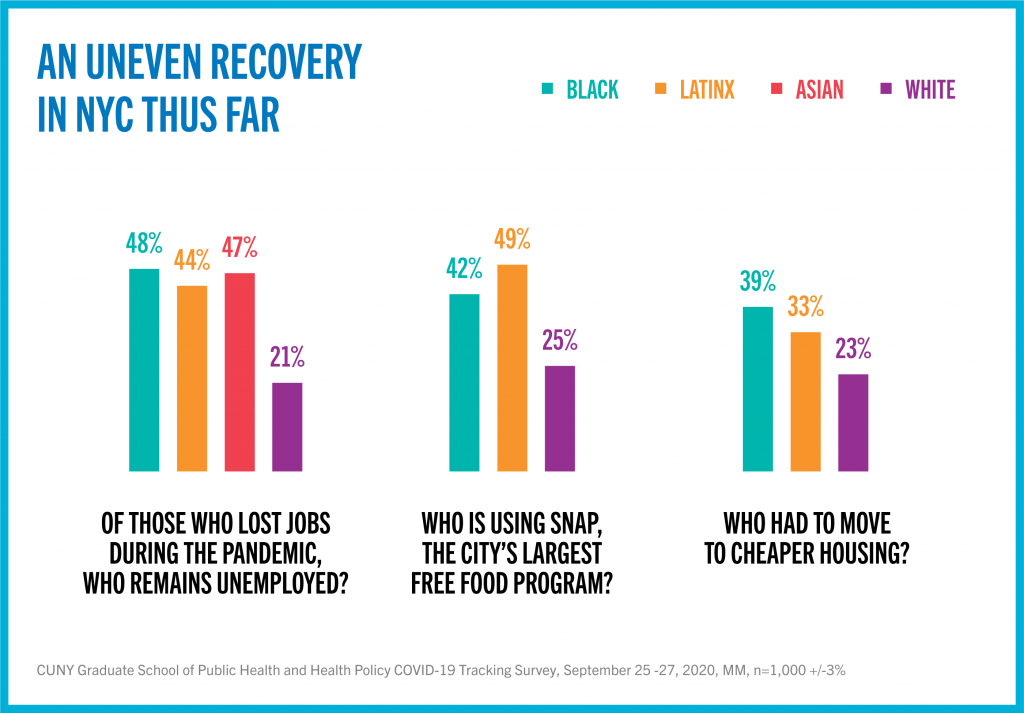 The impact of COVID-19 continues to weigh most heavily on people of color in New York, in terms of job loss, housing insecurity, and food insecurity. Among those who lost their jobs during the pandemic, 48% of Latinx, 44% of Blacks, and 47% of Asian Americans remain unemployed compared to 21% of White respondents. The city’s largest free food program (SNAP) was used most frequently by Latinx (49%) and Black (42%) respondents, compared to one quarter of White respondents. These disparities are also evident in housing instability: 39% of Latinx and 33% of Blacks had to move to cheaper housing since the pandemic, compared to 23% of Whites.

“In the face of this pandemic, it is encouraging that so many people continue to maintain their hope, a great sign of our resilience as New Yorkers,” said CUNY SPH Dean Ayman El-Mohandes. “However, New Yorkers are aware that COVID-19 remains a serious public health threat, and they must recognize that its toll has been felt unequally among people of color and limited means.”

Other findings from the CUNY SPH September 25-27 COVID-19 Tracking Survey:

Half of the respondents (50%) believe that the decision to delay opening NYC public schools and subsequently reopen them in phases was made in the best interest of the public’s health and safety. However more than a quarter (27%) believe this plan was not safe, while the remaining 24% were unsure. Almost two thirds of respondents with a child in public school agreed with the reopening plan.

When asked if businesses and activities were reopening at the right pace, 33% of respondents said yes, while 22% wished for quicker opening and 28% believed the pace should be slower.

New Yorkers are gradually resuming previously restricted activities. Nearly half (47%) of respondents reported working outside of their home in the past two weeks, and more than half (56%) have visited the doctor for routine care. A quarter of respondents (25%) have participated in an indoor event with more than twenty other people present, and the same number (25%) have begun working out in an indoor gym. Half of the respondents continue to engage in outdoor activities.

When asked how they are responding to the changes seen in New York City, 70% of respondents reported they plan to stay in the city and continue to work (or look for a new job) while the economy recovers. Among the 20% of respondents who plan to move away from NYC, more than one third (39%) say they will return when the city is in better shape.

Plans to leave NYC for better economic opportunities varied by the respondents’ borough, age, income, and education. Staten Islanders expressed the highest likelihood of leaving NYC at 28%. One out of five (21%) respondents from the Bronx and Brooklyn say they have made plans to move away from the city. Only one in eight (12%) percent of Queens residents and 17% of Manhattanites said they are likely to leave.

More than two respondents in five (44%) with a college degree said they plan to leave the city, compared to 37% of those with some college or less.

Food insecurity remains a serious issue, with 38% of households concerned that they may run out of food before being able to afford to purchase more. Almost a third (31%) of respondents said that they had run out of food for their household during September. Large numbers of New Yorkers reported that they are using public food benefit programs such as SNAP (34%), food pantries and soup kitchens (28%) and the city’s Grab and Go Program (26%).

Almost a third (31%) of respondents said they have changed their living arrangements since March 1st. Among those who have moved, Latinx respondents (41%) were most likely to report moving to cheaper housing. Similarly, 37% of middle-income households also said they had found cheaper accommodations. A substantial minority of respondents with bachelor’s degrees (41%) said they have sought new housing, most often moving back in with their families.

Testing, Illness, and Death: More than half (52%) of respondents stated that at least one person in their household had been tested for COVID-19 since March. Of those tests, 15% were positive.

Almost three-fourths (73%) of all respondents reported that they always wear a mask in public covering both their mouth and nose. Consistent mask wearing was reported most frequently (82%) by Bronx residents.

Over half (55%) of those who said they always wore a mask also believed the NYC economy would not recover until there was a vaccine and seven in ten (71%) of them believed it is likely or very likely that there will be another large surge of COVID-19 cases in NYC.

A plurality (42%) of New York City respondents said they trusted the state government more than the federal government with regard to information about COVID-19.

42% replied they trust the NY state government’s response instead

11% trust both the federal and state governments

16% do not trust either government

11% felt unsure of how to answer

The CUNY Graduate School of Public Health and Health Policy (CUNY SPH) survey was conducted by Emerson College Polling from September 25-27, 2020. The sample for the New York City results was n=1,000, with a Credibility Interval (CI) similar to a poll’s margin of error (MOE) of +/- 3 percentage points. The data set was weighted by gender, age, ethnicity, education, and region based on the 2019 1-year American Community Survey model. Additional considerations beyond the ACS model influenced weights for race/ethnicity as the Census Bureau collects two sets of race/ethnicity data by grouping Hispanics and races together (e.g. Hispanic Whites) as well as separating non-Hispanic and Hispanic groups. To create one data set that more appropriately represents the racial diversity in NYC, we grouped Hispanic and Latinx respondents together. It is important to remember that subsets based on gender, age, ethnicity, and region carry with them higher margins of error, as the sample size is reduced. Sampling parameters were set based Borough-level population data: 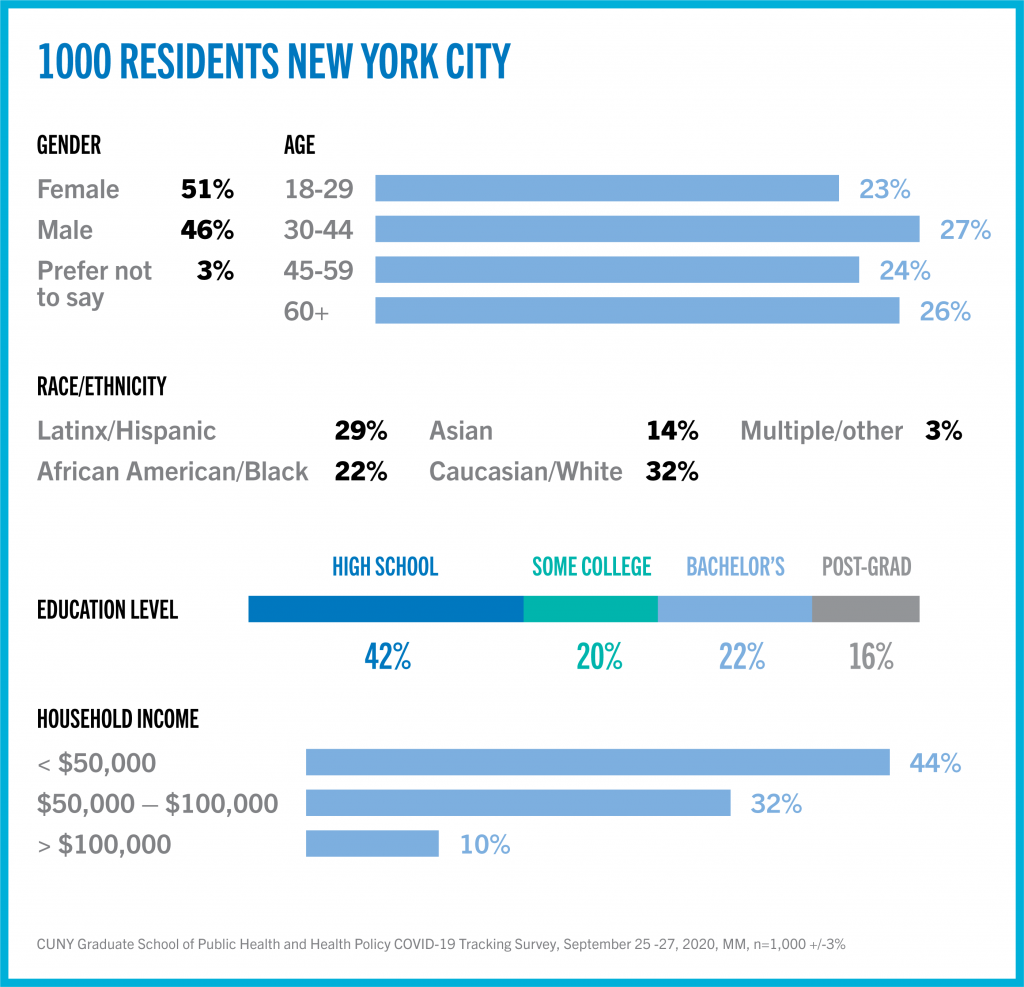