New Yorkers now think that the worst of the COVID-19 epidemic has passed but remain cautious about resuming normal activities. Many say they will not participate fully in everyday life until a vaccine is available. These are the major findings of the eighth weekly city and statewide tracking survey from the CUNY Graduate School of Public Health & Health Policy (CUNY SPH) conducted May 1-3.

“New Yorkers are realists first and foremost,” said Dr. Ayman El-Mohandes, Dean of CUNY SPH. “They know we can’t just flip a switch and go back to the way things were. Many people believe a safe, effective coronavirus vaccine is essential to restoring public confidence, which suggests that they know they are facing a fairly long period of uncertainty, even with the expedited vaccine development program now under way.”

Less than half (46%) of New Yorkers now think they are at high risk of getting sick with the virus, the lowest percentage since the second week of polling, when it was at 43% before peaking at 58% the following week. However, 53% of this week’s respondents said they know someone who has tested positive for the coronavirus, which is the highest reported since the start of the survey two months ago. The percentage of both African American and Caucasian respondents who reported knowing someone who tested positive increased significantly to 61%. Findings were unchanged among Latinx/Hispanics this week (46%), while the percentage of Asians who reported knowing someone who tested positive rose to 35% from 21% in week 7.

Reports of social isolation dropped last week for the first time in a month, with 35% reporting not feeling socially connected at all, down from 43% in weeks 4 and 6. New Yorkers also appeared to be coping better with mental stress. A third (33%) of this past week’s respondents report feeling anxious and less than a quarter (24%) felt depressed more than half the time over the past two weeks. This is down considerably from earlier reports, when 40% reported anxiety and 32% said they felt depressed more than half the time.

A Vaccine as the Key to ‘Normalcy’

We asked New Yorkers how comfortable they would feel about participating in a number of activities if business reopened June 1st with some spacing precautions. Responses listed below indicate the desire of New Yorkers to prioritize certain activities they consider essential after June 1st.

These percentages varied by age and income level. Younger groups were consistently more willing to venture back into ‘normal’ life, while those in lower income categories were less willing. 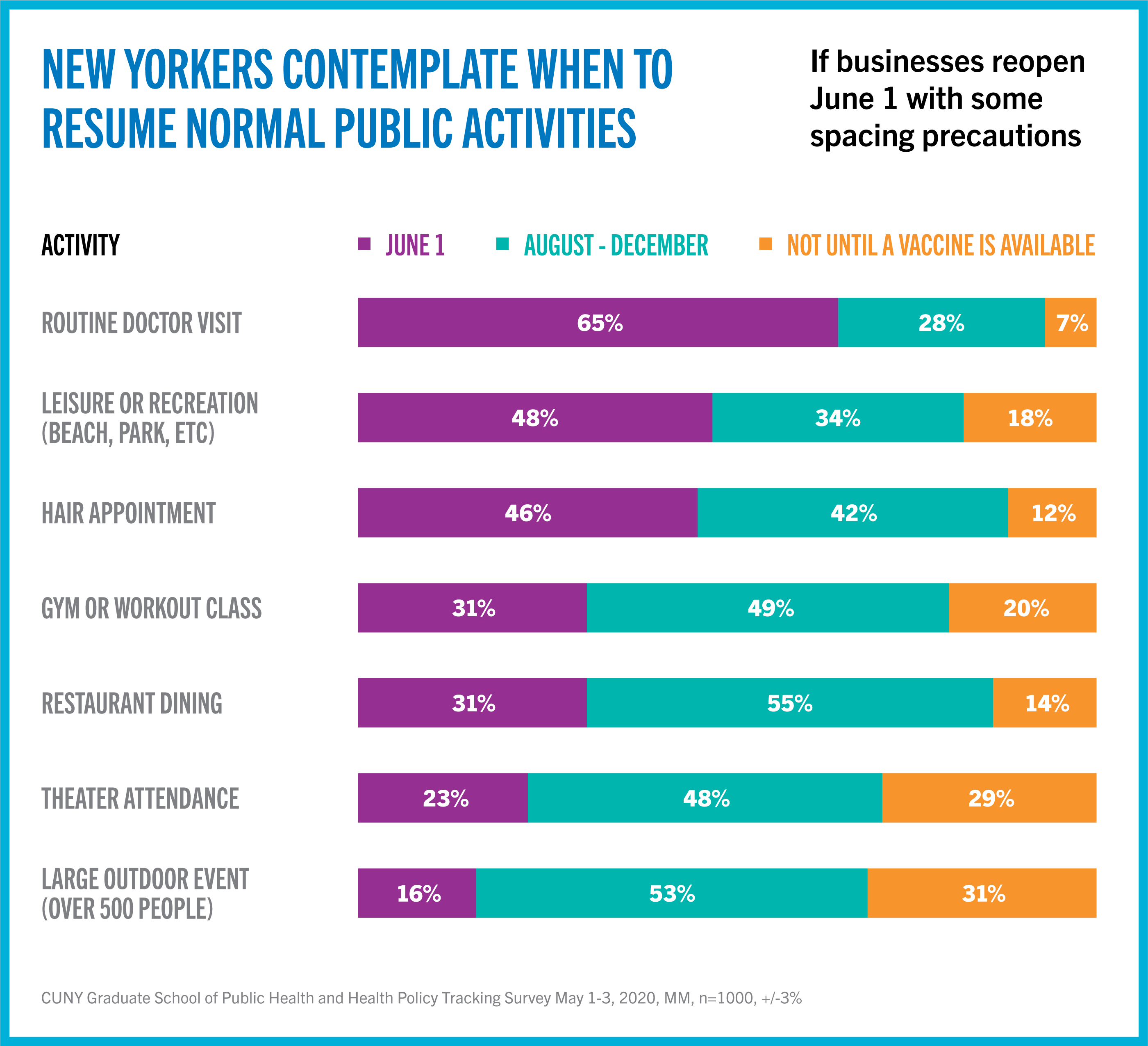 “When seven in eight New Yorkers say they would take a proven safe and effective coronavirus vaccine, that is cause for optimism. However, to reach that level of community protection we will have to mount a major vaccine education initiative. Our already overburdened physicians and health system will need support for the front-line communication responsibilities that our respondents expect their doctor to do. Meeting this health communication challenge will require almost as much effort as the vaccine development process itself,” stated Dr. Scott Ratzan, Distinguished Lecturer at CUNY SPH.

“These findings show food insecurity levels in New York City three times higher than before the epidemic. This and our previous surveys provides further evidence that the COVID-19 epidemic is having a disproportionate impact on New York City’s Latinx/Hispanic population, who report higher rates of food insecurity, loss of health insurance and loss of employment than other population groups,” said Nicholas Freudenberg, Distinguished Professor of Public Health at the CUNY SPH. “As the city launches relief programs, it will need to make sure they are reaching Latinx/Hispanic communities.”

This week the New York City Council will hold a hearing on ‘bonus pay’ for essential workers like grocery store employees for bonuses of $30 to $75 per shift throughout the COVID-19 pandemic. Eighty percent (80%) of New Yorkers surveyed supported bonus pay. When asked how this program should be funded, 60% thought the bonus should be paid by the city while 40% thought it should be paid by the groceries or retailers. A fifth (20%) of respondents did not think the City Council had the authority to mandate bonus pay from retailers.