For the New York City subset analysis, a total universe of 8,857,639 NYC residents was similarly defined of which an estimated in 7,086,111 adults were the target population. The sample for the NY Statewide and New York City results were both, n=1,000 with a Credibility Interval (CI) similar to a typical opinion poll’s margin of error (MOE) of +/- 3 percentage points. New York City data collection used this oversample (n=1,000) for purposes of additional sub-group analysis and was proportionally 45.3 percent of the total statewide sample.

The following table lists the weekly participation frequencies for each mode of survey collection.

The following response and cooperation rates are based on industry standard formulas provided by the American Association for Public Opinion Research. The table below reflects the response rates for the New York City subset.

Minimum thresholds (n=75) were required for each category within the variables of age, gender, education and ethnicity. Weights were applied to these four variables based on 2018 1-year American Community Survey model.[ii] Additional considerations beyond the ACS model influenced weights: currently, the Census Bureau collects race/ethnicity data by grouping Hispanics and races together (e.g. Hispanic Whites) as well as separating non-Hispanic and Hispanic groups. This means that there are two sets of Census data on race/ethnicity. Considering the racial diversity of New York City, the survey team felt that the ACS model underestimates the Hispanic (which we grouped with Latinx) population. The weights were adjusted to reflect this in Week 4 and all data from weeks 1-3 were revised to be consistent with 31% Caucasian/White, 29% Latin/Hispanic, 25% African American/Black, 13% Asian, and 2% Multiple/Other. It is important to remember that subsets based on gender, age, ethnicity, and region carry with them higher margins of error, as the sample size is reduced. 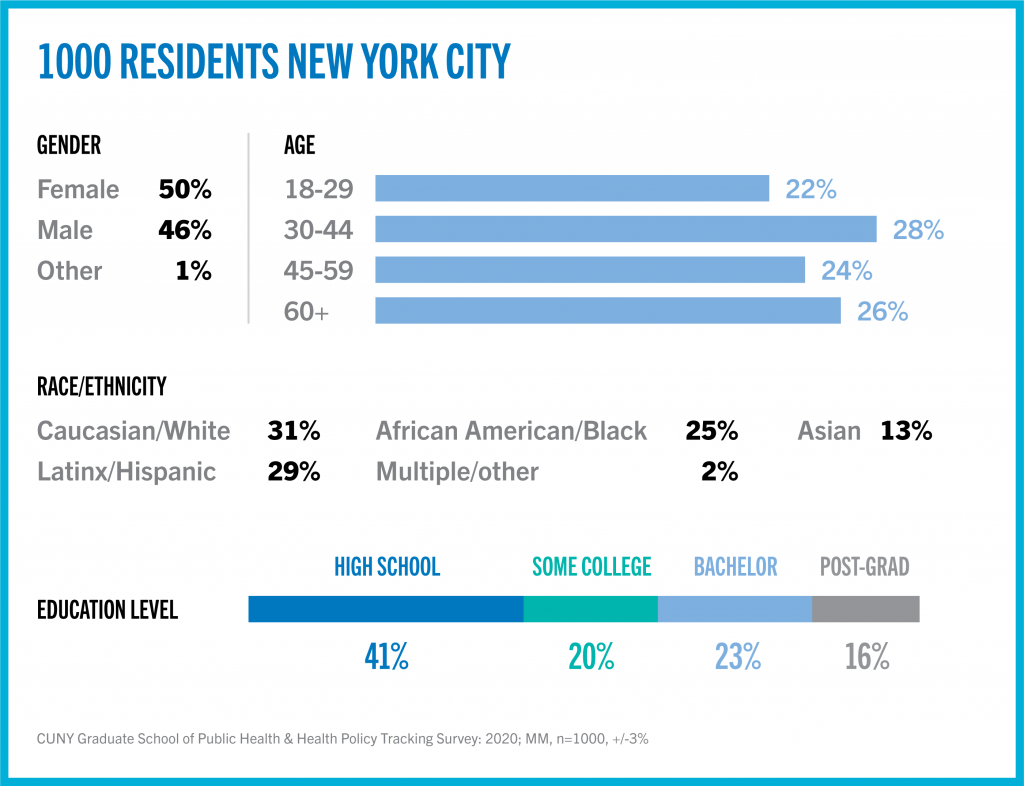