Anxiety rises over job and housing loss, and more New Yorkers fear getting sick as the virus hits people they know.

A majority (57%) of New York City residents did not think the assistance provided by the federal government for NYC and the state as a whole is sufficient to manage the current coronavirus crisis. Only 21% thought assistance was sufficient with the remaining 22% unsure. The findings are part of the third week of data from a city and statewide CUNY Graduate School of Public Health & Health Policy (CUNY SPH) tracking survey conducted March 27-29.

As social distancing extends under Governor Cuomo’s PAUSE order, the number of New Yorkers who reported feeling “not at all” socially connected in the past week rose to 40%, nearly doubling the percentage (23%) of those who felt similarly isolated the previous week.

The strain of the pandemic is taking its toll on the mental health of New York residents; 44% reported feeling nervous, anxious or on-edge more than half the time (at least 3-4 days a week or more often), while 34% reported similar levels of feeling down, depressed, or hopeless.

As the number of confirmed cases in the city and state surged this week, perceived risk of contracting COVID-19 also increased, with well more than half the respondents (58%) thinking they have a high or very high risk of getting sick with coronavirus compared to 43% the previous week.

Similarly, consistent with the mounting number of confirmed cases, another major shift in the latest tracking survey saw 28% of respondents reporting they personally knew someone who tested positive for coronavirus, double the result (14%) from the previous week.

In an additional new finding, 15 percent of New Yorkers (15%) reported that someone in their household was sick at home with symptoms of COVID-19. This was even higher among respondents in the 18-29 age group, with nearly one in five (18%) reporting someone sick at home with a fever or other symptoms. 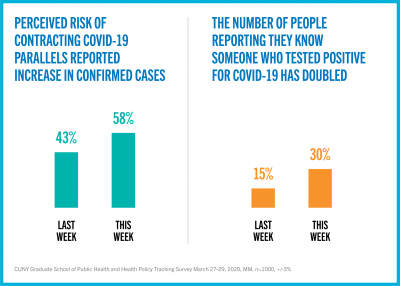 “We continue to see a generational divide in our tracking survey,” said Scott Ratzan MD, distinguished lecturer at CUNY SPH and editor in chief, Journal of Health Communication. “Younger New Yorkers believe they have a significantly higher chance of getting sick than their older counterparts, and this finding has been consistent for the last three weeks.”

“As older people are most likely to suffer serious health consequences from COVID-19, we would expect them to be the most concerned about their risk,” Dr. Ratzan explained. “It may be that our public health communication on risk and consequences of getting COVID-19 are not reaching older people adequately.”

The pandemic is impacting the healthcare of New Yorkers in ways unrelated to the COVID-19 illness. More than a third (36%) of respondents reported the cancellation of medical care for other health problems due to the epidemic, and almost one respondent in 10 (9%) reported losing their health insurance as a result of virus-related job loss.

Job loss is an escalating problem, with 36% in the city reporting that someone in their household had lost their job as a result of the virus, almost a 25% increase over the job loss of 28% reported in the previous week. Job losses continued to affect the Hispanic community disproportionately, with 45% reporting a household job loss. Women (42%) were more affected by job loss than men (31%), a significantly different finding from last week’s survey results. Lower income (less than $50,000) workers were almost twice as likely to report household job loss at 43%, than the highest earners (more than $100,000), 23% of whom reported job loss.

“It is clear that the economic burden of coronavirus is falling disproportionately on the people in our city who are least able to afford it,” said Dr. Ayman El-Mohandes, dean of CUNY SPH. “It remains to be seen how well we can address these disparities.”

About two in five New Yorkers (40%) say they are concerned about their housing situation; 26% said they would not be able to pay next month’s rent and 15% said they could not meet next month’s mortgage payment. A substantial majority (60%) of those unable to pay rent fear they will be evicted.

Despite respondents reporting an increased perception of the likelihood of contracting the virus, only 20% of respondents sought healthcare or advice from a health professional about coronavirus this past week, down by one-third from the two previous weeks, when 33% reported seeking medical care or advice.

There was an increase in those who said they were tested, with 3% reporting they had nasal or throat swab performed by a medical professional; and about 12% of those tested reporting testing positive for the virus.

A majority (62%) of New York City residents said they would take a vaccine for coronavirus right now if it were available; 18% would not and an additional 20% were unsure.

A majority (61%) think that asking New Yorkers who leave the state to self-quarantine for two weeks is helpful in containing the spread, 20% are unsure and 19% think it is not helpful.

The CUNY Graduate School of Public Health and Health Policy (CUNY SPH) survey was conducted by Emerson College Polling from March 27-29, 2020. The sample for the NY Statewide results, n=1,000, with a Credibility Interval (CI) similar to a poll’s margin of error (MOE) of +/- 3 percentage points. The data sets were weighted by gender, age, ethnicity, education and region based on the 2018 1-year American Community Survey model. It is important to remember that subsets based on gender, age, ethnicity and region carry with them higher margins of error, as the sample size is reduced. Data was collected using an Interactive Voice Response (IVR) system of landlines (n=600), SMS-to-online (n=225), an online panel provided by MTurk and Survey Monkey (n=175).

The state was broken out into the following regions: