In an op-ed for CNN, CUNY SPH doctoral student Juan Carlos (JC) Alejaldre says the fight against COVID-19 and the fight for Dreamers is more urgent than ever. 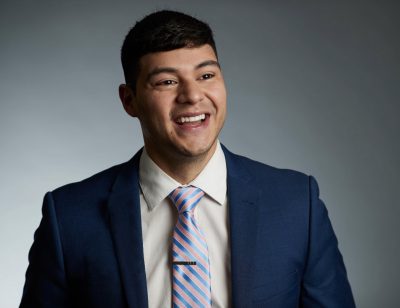 For the last four months, I have been fighting two battles. One against a well-known threat to New York City and the world, Covid-19, and the other against a less visible threat to immigrants nationwide, the systematic attempts by the Trump administration to dismantle Deferred Action for Childhood Arrivals (DACA) — the program that protects Dreamers, undocumented immigrants like me who came to the United States as children, from deportation.

The program is not perfect. It provides us with a work permit that must be renewed every two years, but it does not provide a pathway to legalization or citizenship or the ability to travel outside of the US without the threat of not being allowed to return. This is because the Trump administration ended advanced parole, the program that allowed DACA recipients to leave the country and return for humanitarian or education reasons. Still, DACA has given me many opportunities, including serving my country during the pandemic. That is why this administration’s irrational assault on the DACA program has been particularly cruel: it has left me — a health care professional — with the constant threat of deportation from which my face shield, mask and hospital scrubs cannot protect me.

The dramatic loss of life due to Covid-19 has been striking for me. A little over a year ago, I lost my mother to cancer. After years of working long hours at multiple underappreciated jobs to set me up for success, my mother, who was undocumented, decided to return to Colombia. This was monumental because current immigration laws meant she would face a 10-year ban from returning to the US for having an “unlawful presence” here.
As her illness progressed, I was forced to decide if I should leave the country to say goodbye to her on her deathbed and risk not being able to return to the US, or stay in the only home I know, the country I love. Trapped by the limitations of the DACA program, I made a decision that no person should ever have to make — to not be by my mother’s side when she passed. 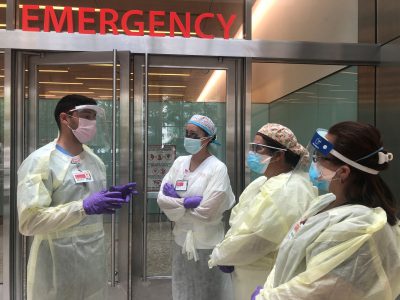 JC Alejaldre (left) talking with three of his colleagues at NewYork-Presbyterian in May 2020.

When Covid-19 began to emerge in New York City, I was informed that our Emergency Department at NewYork-Presbyterian/Columbia University Irving Medical Center was overwhelmed, and I was asked to lead an effort to help. Since then, I have operationalized Covid-19 tents located at NewYork-Presbyterian’s Columbia and Allen Hospital campuses and mobilized staff to assess and treat as many stable Covid-19 patients as possible outside of the ED.

With every new patient that entered the Covid-19 tents, I was reminded of my mother. She was a caregiver to anyone she met, and I was upholding her legacy, taking care of my community when it needed it most.

To date, we have seen over 1,000 patients from the Washington Heights community, mostly Black and Latinx individuals whose communities have been hit the hardest by the pandemic. It was extremely difficult to see individuals that looked like me so sick. In minority communities such as these, Black and Latinx New Yorkers have been dying at a significantly higher rate compared to White New Yorkers. To further underscore the health disparity, one of the largest immigrant communities in New York City, East Elmhurst in Queens, accounted for the highest number of positive Covid-19 cases in New York City.

I am a Dreamer but, more importantly, I am an American. I ran into battle in the face of a global pandemic to take care of my community and my country. My circumstances do not define who I am, but my actions do. I feel proud to boast that I am one of over 200,000 DACA recipients who are considered essential workers, with over 43,000 working in healthcare. Over 200,000 individuals get up every single day to make sure that this country stays on its feet through the greatest public health crisis of the last century. And through it all, we have no idea if the next day our lives will be uprooted.

Waiting on the US Supreme Court’s decision on the Trump administration’s termination of DACA was a daily reminder that I might have no choice but to stop aiding my community — at a moment’s notice.
On June 18, the Supreme Court ruled that the Trump administration cannot immediately terminate DACA, meaning about 650,000 current DACA recipients, including those 200,000 essential workers, can momentarily breathe a sigh of relief.

But today, neither of my battles are over. We were successful in flattening the curve in New York City, but Americans are now seeing the virus emerge in full force across the country. In every affected city, in every overwhelmed community, there is a DACA recipient rising up to meet the challenge. Despite this, the Supreme Court’s decision has left the door open to further challenges against DACA and the continued threat of deportation, with the Trump administration still considering what is next for the DACA program.

Now more than ever, the fight against Covid-19 and the fight for Dreamers is one where we cannot relent and must prevail. I will continue to honor the sacrifices my mother made when she brought me to the United States at the age of six, and those of millions of other immigrants, by fighting for the health and wellbeing of people in need.

This is what being an American is to me.