Young Black and Latina women in the United States experience higher rates of sexually transmitted diseases including HIV, compared to White women. HIV and STD researchers have had success recruiting populations like men who have sex with men for Randomized Controlled Trials (RCTs) using various websites, including Craigslist and Facebook, but there is little research exploring how to best recruit Black and Latina women for such studies. 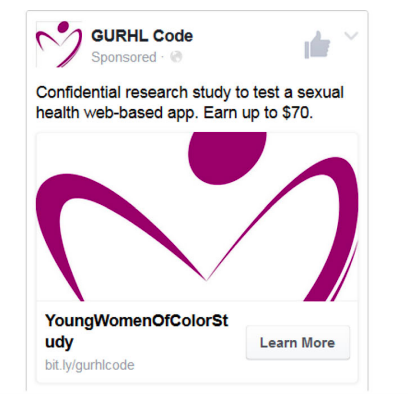 A social media ad used to recruit women of color for a RCT.

Given the limited data on recruitment in RCTs among Black and Latina women, CUNY SPH DPH alumna Sonia González and Professor Christian Grov published a paper in the Journal of American College Health describing the recruitment process for a web-based pilot RCT among Black and Latina women aged 18 to 25 years in New York City. The study examined demographic and behavioral characteristics of those who were eligible and who enrolled into the RCT compared to those who were eligible and began the screening survey but who did not enroll in the study. The results from this study stemmed from Dr. Gonzalez’ dissertation research, which was funded by the NIH.

Targeted electronic recruitment, such as emails, generated a greater proportion of participants from this demographic to participate in a sexual health web-based app pilot RCT.

“We expected to recruit our sample capitalizing off the broad reach that social networks and online dating web-sites offered,” said González. “We instead found that recruiting a sample of young Black and Latina women in New York City aged 18 to 25 was more easily achieved through CUNY professors and campus LISTSERVs.”

The researchers concluded that recruiting young women of color may be facilitated through known and trusted adults, such as college professors, rather than through anonymous banner advertisements on social media.

Further research is needed to understand how social media banner ads might be used as an effective recruitment source for this specific population.