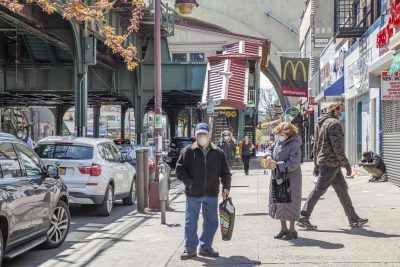 The study, which was published Friday in Science, is the first to trace the source of these cases and show that the SARS-CoV-2 outbreak in New York City arose mostly through untracked transmission between the United States and Europe, with limited evidence to support any direct introductions from China, where the virus originated, or other locations in Asia. The researchers also documented early community spread of SARS-CoV-2 in New York City during that time.

New York City has become one of the major epicenters of SARS-CoV-2 infections in the U.S. with nearly 17,000 fatalities in the metropolitan area. Knowing when the virus came to New York and the route it took is critical for evaluating and designing containment strategies.

The research team sequenced the virus causing COVID-19 in patients seeking care at one of the hospitals of the Mount Sinai Health System. Phylogenetic analysis of 84 distinct SARS-CoV2 genomes indicated multiple, independent but isolated introductions mainly from Europe and other parts of the United States. Clusters of related viruses found in patients living in different neighborhoods suggested that community spread was already underway by March 18.

“Our study provides unexpected insights into the origin and diversity of this new viral pathogen,” Ciferri says. “We found clear evidence for multiple independent introductions into the larger metropolitan area from different origins in the world as well as the USA. Additionally, we identified strain clusters in different neighborhoods across the city, suggesting that untracked community transmission was already underway prior to March 18. Our findings highlight the crucial need for early public health response in the event of a novel emerging pathogen. Hopefully, the evidence we have uncovered concerning the early spread and introduction into what became the national epicenter, will serve as guidance for future public health efforts in early stages of pandemic response.”